Out to Sea and Off the Grid: The Ecstasy of Isolation 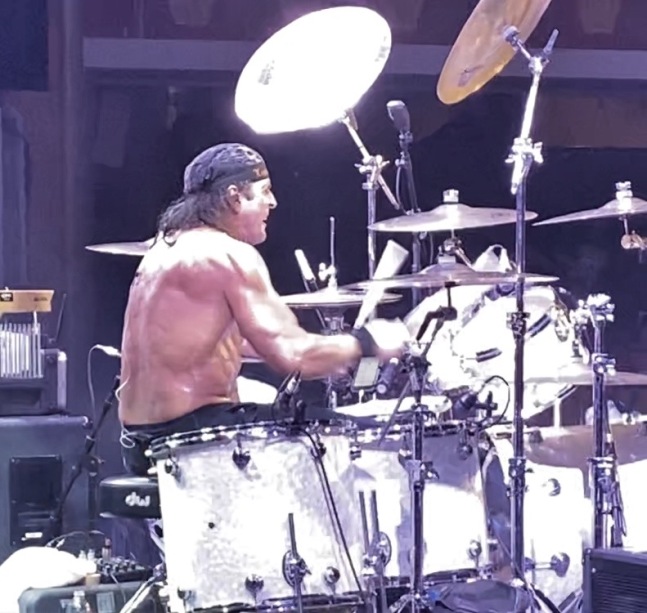 Here are some random thoughts, pics, and vids from a music cruise I just took through the Caribbean—and its direct connection to some very strange times in the world at the moment. 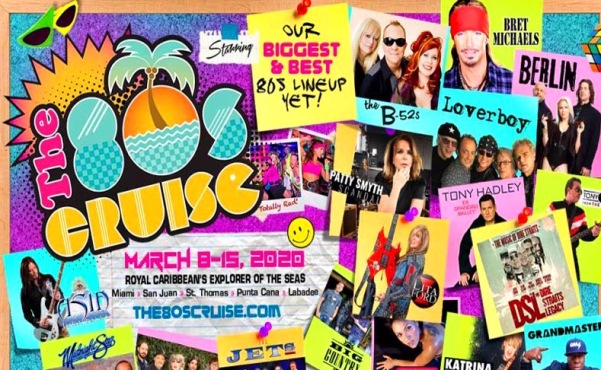 Just got back last Sunday from the 80s Cruise with Lita Ford and company. It’s kind of like a Monsters of Rock Cruise, but considerably less of a hard rock extravaganza, and more of an immersion into 80s mainstream pop culture. We were out to sea for an entire week, just as shit was starting to implode everywhere else in the world with this coronavirus situation. 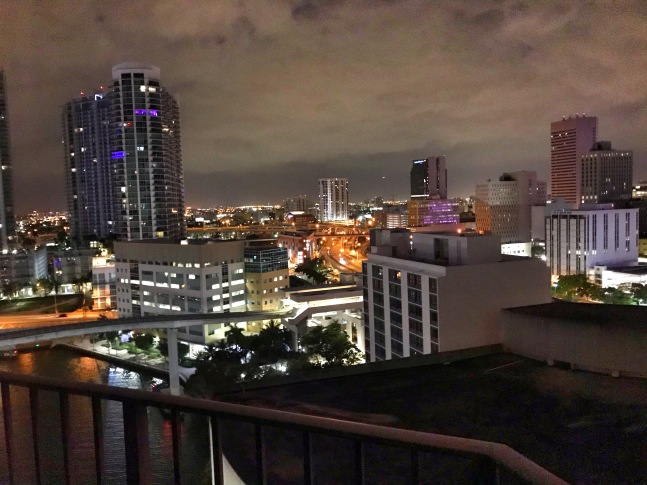 Hotel room view of Miami, the night before… 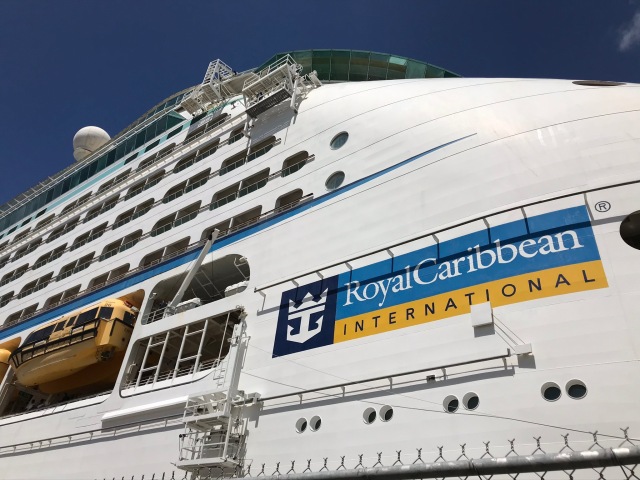 The only shot of the boat I happened to grab…

In fact, the first thing that happened prior to pushing off to sea was we found out a couple of our fellow headliners would not be joining us. This altered the performance itinerary quite a bit: instead of playing on nights one and four, we would now be playing on nights six and seven, co-headlining with Kool and the Gang. This meant five days of out-at-sea downtime before showtime!  (By the way, it would be announced a day or two later that three more bands pulled out, as well. Pretty unprecedented.)

Once we set sail on Sunday, and even as I was catching wind of the “global unraveling” that was beginning to go down, I chose to remain almost completely off-the-grid for as much of the trip as possible, particularly for the first five days. (Yes, even more so than usual!)  Not as an act of reality denial because, after all, what could I do about anything from out there? But more in an effort to take a much-needed digital/communication sabbatical: no texts, calls, emails, internet, TV, or social media posts for virtually the entire trip.

A sunrise, in four parts: 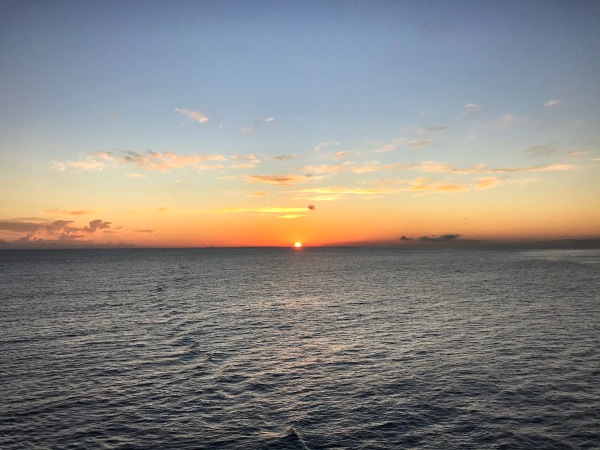 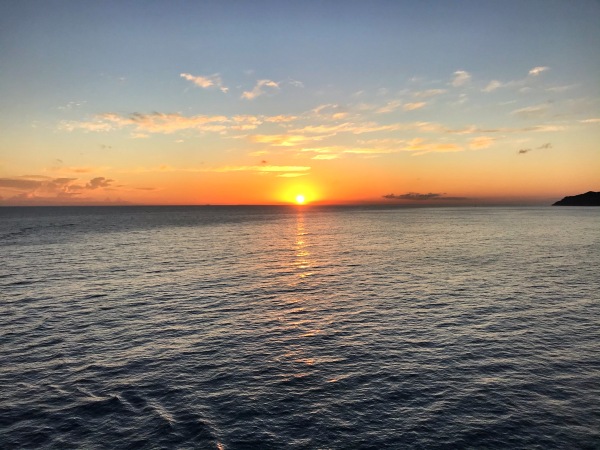 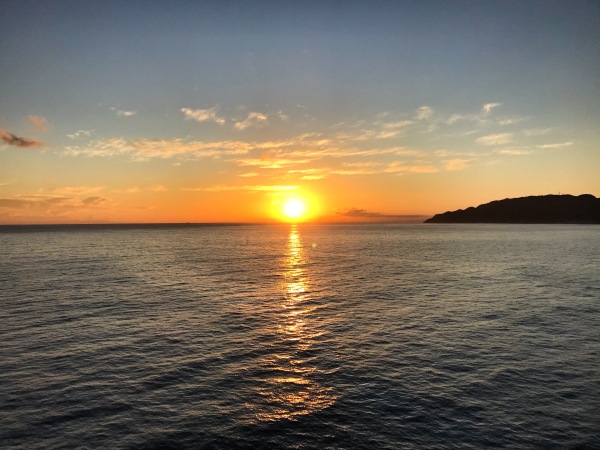 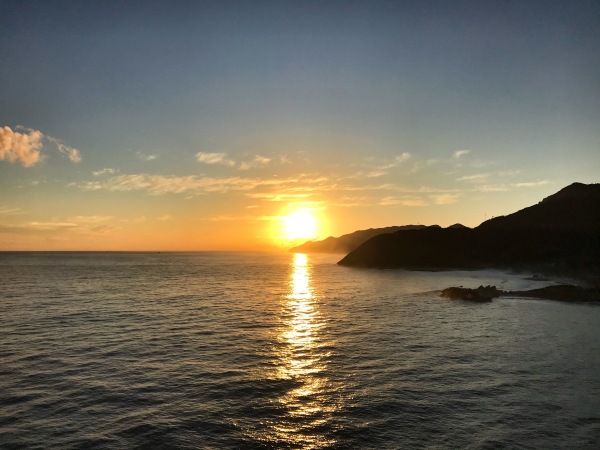 Additionally, I tried to roam the ship anonymously whenever possible, like a ghost: zipping around mostly at odd hours, and/or through lesser-traveled thoroughfares, trying to minimize all forms of interaction. Not because I don’t enjoy talking to people, but because this seemed to pair well with the mental-exile theme of the week: Minimize external input, and maximize internal silence. That said, whenever I had a chance to talk to someone, it was welcomed. Folks were super cool out there. It’s just that I wouldn’t go out of my way to socialize, based on this directive. 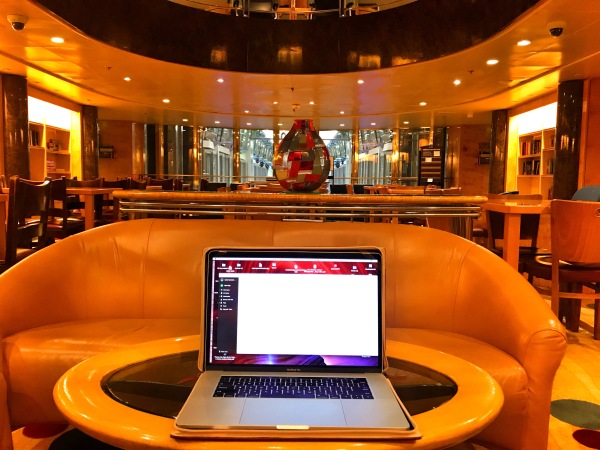 Couple this with some solitary pursuits—lotsa random reflection, more-than-usual journaling, lotsa reading and writing (especially in the library, my favorite spot on the ship), in-room practice pad work to keep the chops up, and several “medies” (meditation sessions) tossed in throughout the day—and… well, it was essentially the mental equivalent of a nutrition cleanse: a zeroing out, a cleaning house of the mind, a stripping down of the inessential… all so my brain could have some extra leeway to do its glorious thing: Fire on all eight cylinders, rather than trying to juggle and process so much shit all the time that it’s running on five or six!

It was magnificent… rejuvenating… exhilarating… just to feel the full crackle of my brain’s neurocircuitry, connecting and reconnecting in ways that inspire a grander brand of thinking. Moving forward, I no doubt need to double down on this “airplane mode” way of living. 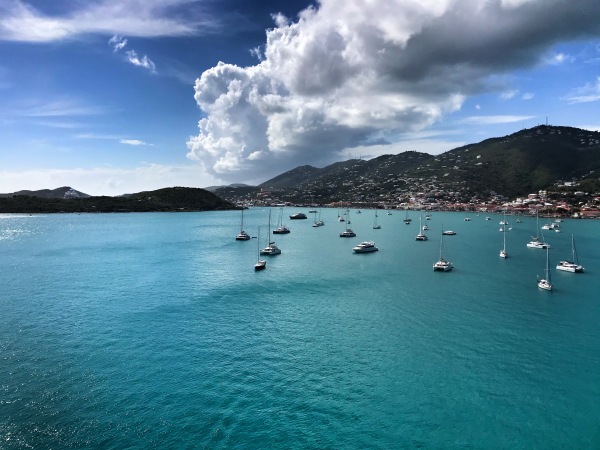 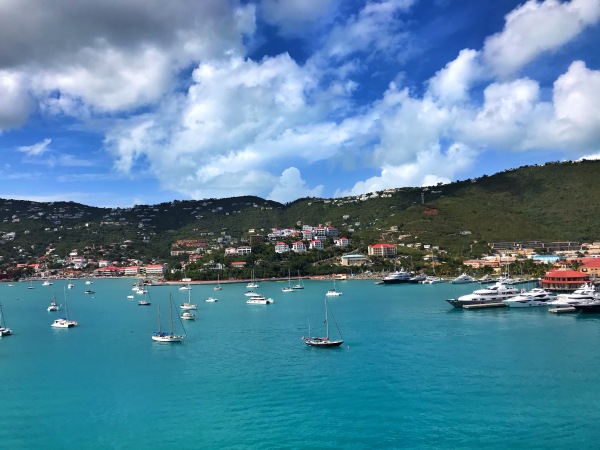 The boat made stops in Puerto Rico, Punta Cana, St. Thomas, and Haiti. And while the first couple days were extraordinarily rough with rain and wind—so much so that the upper deck/running track area was initially closed off (the horror!)—things smoothed out by Wednesday. The winds calmed a bit, the sun poked back out, and it was then that a more typical festive cruise vibe seemed to return to the ship.

As usual, the training continued throughout the week. Always. No matter what. Every day. Yes, I train every day—at least that’s my intention. Because life will do what it’s gonna do and you will have to miss a day here or there… which is why I never have any planned days off. They’re gonna happen anyway.  Feeling burnt-out or overtrained? Fine. Do some light calisthenics, with some basic martial arts movements and drills, slow and easy, almost Tai Chi-style. Then, finish up with some simple stretches. The whole thing could take 20 or 30 minutes, tops. That will do more for your recovery than being completely sedentary on a “rest day.”

As it turned out, I hit the gym every morning right around when it opened at 6:00 AM. And I also managed a few killer runs along the way, both around the boat and on land after docking. 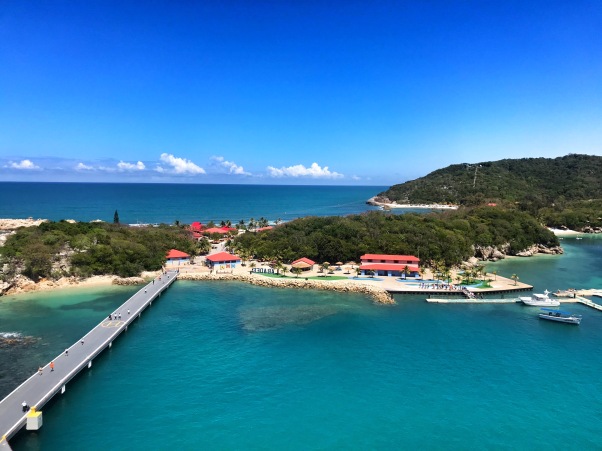 Dropping into Haiti on show day… 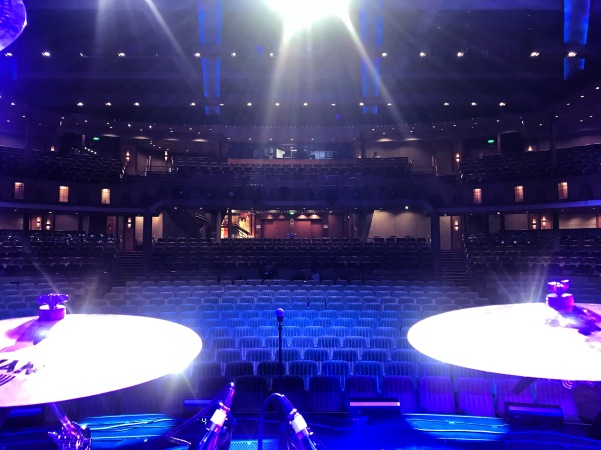 Once Friday rolled around, it was time to do some playing. The shows were fun and the crowds were lively. As mentioned, we shared the stage with Kool and the Gang. It was so refreshing to see and hear these guys, still out there, preserving the legacy of the large, funky, R&B horn band. I used to play a bunch of their old school 70s stuff back in the day when I was giggin’ a lot in Houston’s notorious fifth ward. (Not so notorious these days, with how much the city’s changed… but that’s probably a good thing!) I would even go on to cover “Jungle Boogie” on a record I did with Neil Zaza and Bill “The Buddha” Dickens called Snap, Crackle, and Pop… Live! The point being, I felt a special kinship to their music, and the band could not have been “kooler” to us. (Sorry… couldn’t resist.) 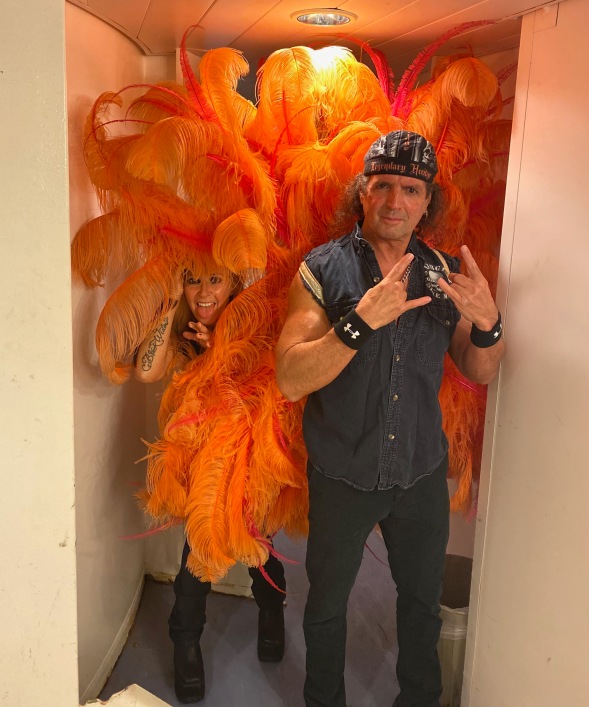 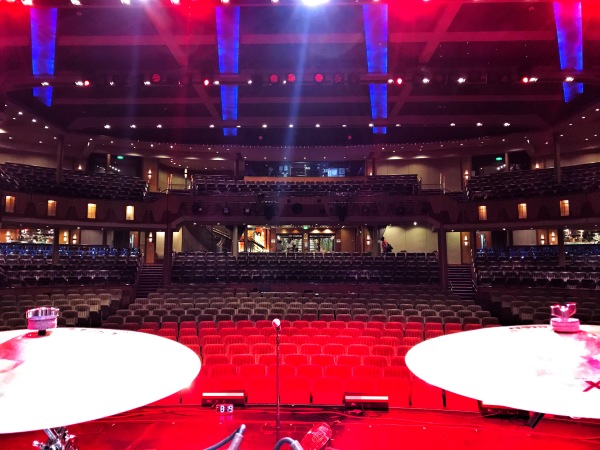 All of this personal isolation stuff aside, I got the sense that me and my fellow passengers were in a floating bubble while we were at sea, aware of much of what was going on in the rest of the world, but oddly detached from it—at least for a time. Then, when we all got off the boat and headed for the airport, we could gradually step into the “new normal,” which was rapidly being redefined by the moment.

Another sunrise, in four parts: 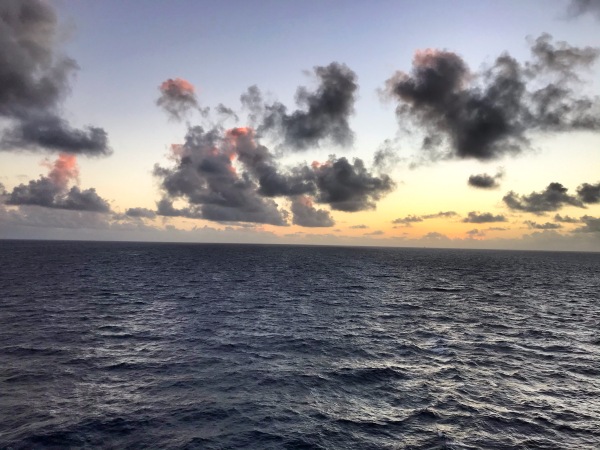 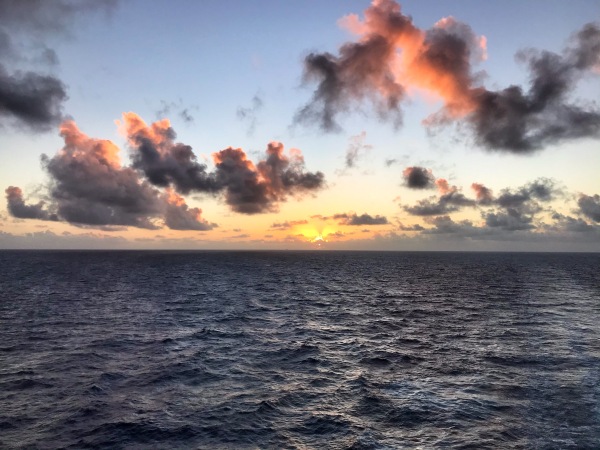 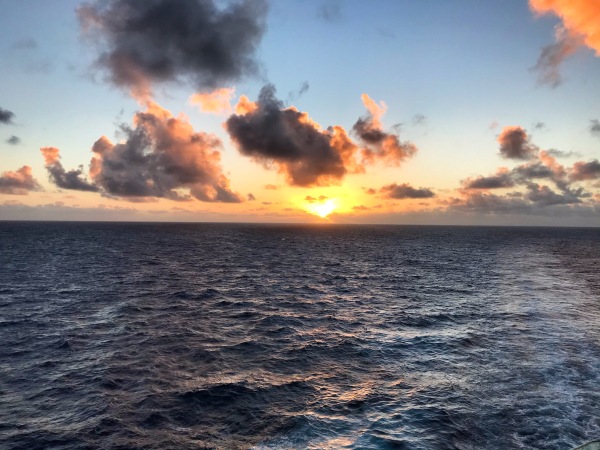 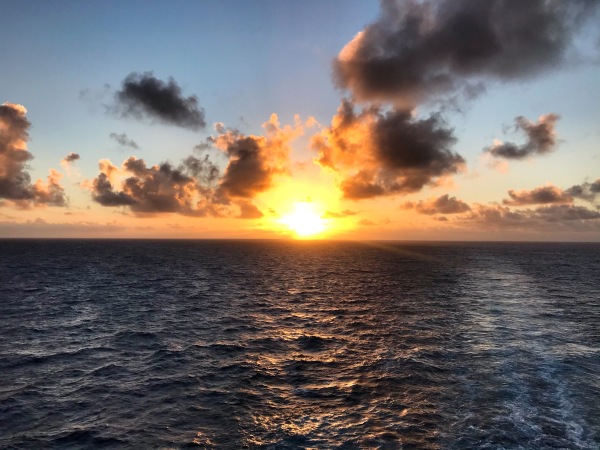 Now, here we are nearly one week later, in a time of great uncertainty… particularly here in California, where this new “stay at home” mandate just kicked in.  So, in reflection of these unusual days ahead—and given my recent experience in relative isolation—I guess what I would say to anyone interested in an “isolationist’s” perspective is…

Take advantage of the potential solitude in “elective isolation” (if you’re going that route). Your mind—when unencumbered by all of the screens, hoopla, worry, and distraction—is your most powerful ally right now;

Try to minimize exposure to the 24-hour news cycle. Five minutes of that shit a couple times a day will keep you plenty informed. Beyond that, it’s all designed to soften your mind;

Don’t forget to breathe… deeply… throughout the day, as you take a few “deep-belly” breaths whenever you think about it. I’m guessing that, with our current situation here, we all have a subliminal tendency to breathe shallowly, so as not to potentially inhale anything harmful in our environment. And yet, breathing deeply is one of our best stress reducers and body/brain energizers—as any Buddhist monk would tell us;

And most of all, embrace this unparalleled opportunity at hand to see everything through an illuminating new filter in these days ahead.

These are extraordinary times, the likes of which we may never see again.

A few more pics/vids for your contemplation and reflection… 🙂

Another kick-ass sunrise run on the boat, this one from the North Atlantic 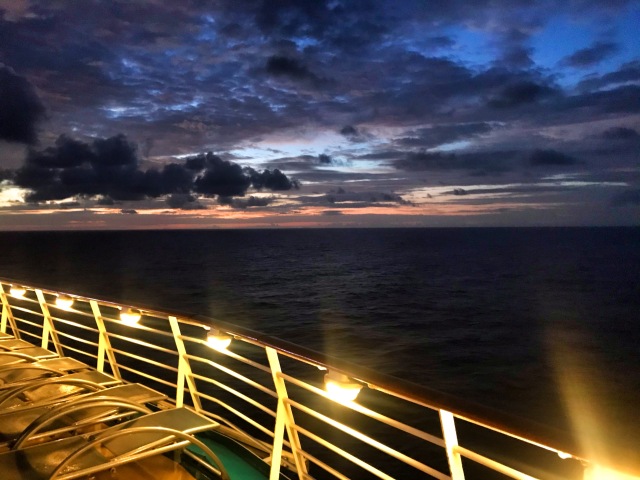 Pre-sunrise shot from the deck 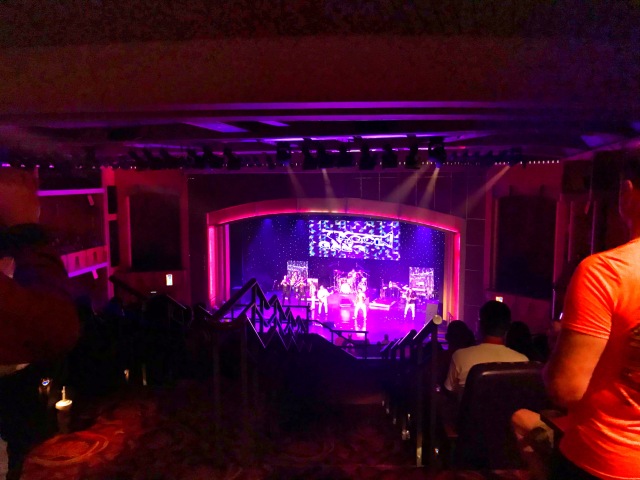 “The Gang” from the Palace balcony 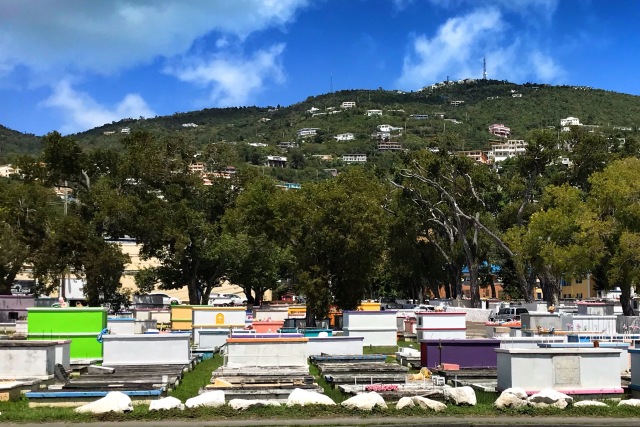 An above-ground cemetery I ran across in St. Thomas 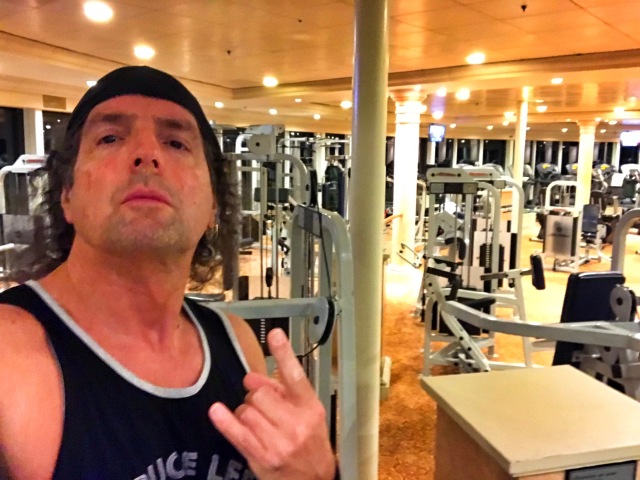 Yet another senseless selfie from yet another gym…

Bobby Rock is a world renown drummer, the author of nine books, and a recognized health and fitness specialist with certifications in exercise, nutrition and meditation. He has recorded and toured with a variety of artists, released three CDs as a solo performer and is recognized as a top drumming educator. He is currently touring with rock icon, Lita Ford. Through speaking, writing and activism, Bobby remains committed to a number of animal and environmental causes. Bobby lives in Los Angeles.
View all posts by Bobby Rock →
This entry was posted in The Artist Realm and tagged 80s cruise, aquarian drum heads, bobby rock, coronavirus, dw drums, kool and the gang, latin percussion, lita ford, meditation, pro mark sticks, running, sabian cymbals, training, vegan, veganism. Bookmark the permalink.

5 Responses to Out to Sea and Off the Grid: The Ecstasy of Isolation