Here’s an excerpt from my book, Zentauria: My Season in the Warrior Utopia.  The book is essentially an 11-week documentation of life with a secretive utopian community, on a small island off the east coast of Africa.  I wrote it journal-style, with a conversational narrative, but I believe the themes, experiences and insights covered throughout might be useful – even inspiring – to others.

Here’s the Prologue, which articulates both the deep history of the island, and my personal connection to it:

THE KING of all the land lived in the house of rock; a massive granite structure that took untold amounts of struggle and strife to build. Thousands of citizens basked in the radiance of the king and his empire, as resources were abundant and all was good for a seeming eternity. But then, there was a climate change, of sorts, and the once plentiful resources dried up or fell out of favor, depending on who you ask. This led to the inevitable exodus of the townsfolk, followed by the reluctant exile of the king. It was a spectacular free-fall into irrelevance.

Actually, I’m talking about Africa’s Great Zimbabwe era of the 15th century. Must’ve been a brutal time for the king, I tell ya… fucking brutal! But the king was a pretty resilient guy, and he responded to this obliteration of fortune like any dignified ruler would; he disappeared. That’s right. He and his sizable inner-circle relocated to some primo real estate acquired by the royal family during better times—a pristine, undeveloped island just thirty kilometers east of the African coastline—to contemplate life and, eventually, start things anew. 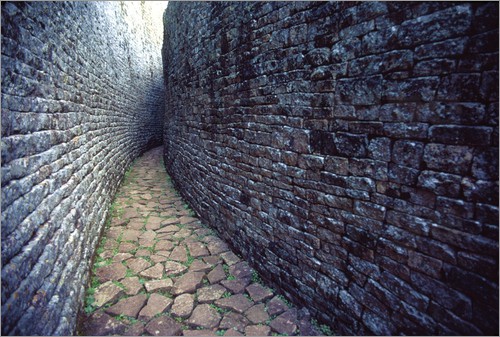 The stone ruins of Great Zimbabwe, circa 15th century

From this inauspicious beginning, a much greater and grander empire would be born. But not without a few epic shifts and twists. It would be one thing to survive on the island, but yet another to truly thrive. And what the king rediscovered about himself was that he was here to thrive, and thrive large. But how? What could be cultivated with the resources at hand to create a compelling, inspiring, and sustainable empire?

This question became the lofty theme of a daily sunset ritual; an active group meditation that took place among the swaying acacias near the shoreline, as the sun melted fire-orange into the horizon. A perfect row of nearly fifty shirtless warriors would all stand quietly with heads bowed and eyes closed, waiting, while the king slowly strolled back and forth behind them, whispering expectantly to the God Force. Every day they did this. 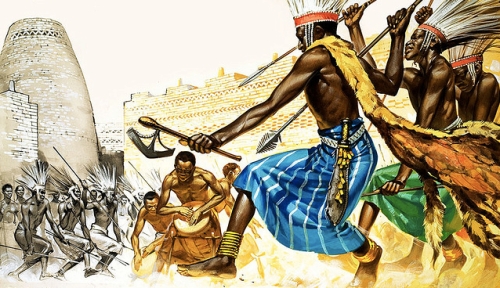 And then one day, he got his answer.

THE MONK washed ashore in a splintered caravel during the exact time of said ritual. He hailed from the Shaolin traditions of Ming dynasty China, but had traveled extensively throughout Europe as both a mercenary and confidante to the region’s most influential. Fascinated by the synchronicity of the monk’s arrival, the king urged him and his colorful European shipmates to stick around. Soon, the monk would develop an enormous vision for the island, and then infect the king with this vision. The king, in turn, would become obsessed with its manifestation.

This was the birth of Zentauria.

ZENTAURIA was officially established back in 1463 as an experimental, multi-cultural community designed to foster the highest levels of human potential in the arts, sciences, and esoteric spiritual practices. Part university, part think-tank, part mind/body retreat, Zentauria was intended to be the ultimate live/work environment for some of the world’s most progressive thinkers, artists, and spiritual practitioners. To this end, it would also serve as an inspirational polestar for those wishing to study art, science, or religion, join an apprenticeship, or simply experience the ambience of a high-vibrational community. And, of course, it would become a coveted destination for the world’s richest and most powerful; a magical adventure worth many future moons of tall tales and bragging rights.

Zentauria’s “super-hub” coastal location would serve as a neutral ground between the creative epicenter of Renaissance-era Europe and the spiritual nucleus of Asia’s deeply rooted Zen culture. And within two short decades of serving its initial purpose and hosting many of the world’s most highly regarded artists, monks, and warriors, Zentauria evolved into its own self-sufficient community, with quite an eclectic range of permanent citizens known as Zentaurians.

Through the first two centuries, the fifty square miles of island real estate that comprise Zentauria would change ownership several times and survive a series of international political upheavals. But it would ultimately emerge as its own autonomously governed country in 1763, the year of its 300th anniversary. It would also go on to represent human potential and self-actualization in a way no other culture ever has.

Zentauria’s extreme isolation from the rest of the world has stemmed primarily from the rigid passport/visitation policies the country has consistently upheld in an effort to preserve its utopian qualities. It has been nearly impossible to penetrate this community on any level, and this has given the island a hallowed mystique in certain circles. (By the way, “Zentauria” is the native name for the island and not how it would appear in certain world atlas listings.)

More recently, however, policies have loosened, as some of the new leaders have become more receptive to sharing their rich culture with the rest of the world, albeit on a limited basis. Accordingly, they have invited a few of the world’s brightest leaders, speakers, and thinkers over to Zentauria with the intention of establishing a more global dialogue and a mutually beneficial exchange of ideas. And here is where the shifts and twists of my own journey would create an epic opportunity in the form of an extended invite…

Enter: My Season in the Warrior Utopia.

IMAGINE a secretive community of self-actualized super-beings, whose citizens live without conflict, disease, or prejudice, and who are among the most highly-functioning on the planet, physically, mentally, and creatively. Imagine a people whose enlightened spiritual sense flows through every aspect of their daily lives; from their work, physical training, intellectual pursuits and relationships, to their meditation practices, sexuality, and extreme reverence for planet and animals.

Now imagine living among these joyous, evolved beings for eleven weeks as an active part of their community… free to observe, explore, and document all facets of their rich history and futuristic present. What might you see? What would you learn? How might you be changed from this extraordinary opportunity, and what would you want the world to know about your observations and experiences there?

These are the questions that turned me into a madman over there, as I feverishly attempted to soak it all in and write it all down. It’s the kind of place where you don’t want to go to sleep, for fear that you might miss out on something life-altering. And yet, sleep is your only reprieve from a higher-vibrational ambience that could grind your senses into fairy-dust if you aren’t careful. But I did my best to capture as much as I could, and now I have my own magical adventure to tell you about in the pages ahead.

So climb aboard my flying carpet and let’s soar into the land of the enlightened, the “warrior utopia.” Let’s live among the evolutionarily elite—in the most magnificent culture of metaphor and archetype on earth—and allow our vibration, our creativity, our skills, our intellect, our physicality, our sensuality, our passion, and our compassion to be elevated to heights unimagined. Let’s find out, once and for all, who we are, why we’re here, what really matters, and how we can make the best of things this time through. Let’s learn to walk the talk of the masters before us, so that we can more fully Project the Magnificence and, when the time is right, bring our story to a graceful conclusion, without hesitation or regret.

Here’s to the journey…

Check out our official Zentauria page here for ordering info and more excerpts.

Paperback and Kindle versions available direct from Amazon. Just click the link below:

Bobby Rock is a world renown drummer, the author of nine books, and a recognized health and fitness specialist with certifications in exercise, nutrition and meditation. He has recorded and toured with a variety of artists, released three CDs as a solo performer and is recognized as a top drumming educator. He is currently touring with rock icon, Lita Ford. Through speaking, writing and activism, Bobby remains committed to a number of animal and environmental causes. Bobby lives in Los Angeles.
View all posts by Bobby Rock →
This entry was posted in Zentauria and tagged africa, artist, author, bobby rock, book excerpt, Great Zimbabwe era, mind body and spirit, monk, my season in the warrior utopia, warrior, Zentauria. Bookmark the permalink.