A Public Service Announcement For All Dog People

Yesterday morning around 8:30, I was just about to go to sleep (yes, still keeping those whacked hours), when I got a call from one of the studio guys around here.

“Bobby!  Hurry downstairs.  There are a couple stray dogs running around the parking lot.”  (Whenever there’s any animal-related issue around here, guess who gets the call?)

So I grabbed some spare doggie treats I happened to have in the cupboard and headed out.  By the time I got down there, the two dogs in question had already bolted down the street, which was bustling with LA morning traffic.  I caught up with them about a block away.  They were both part Chihuahua and part something else, and looked to be a year old or maybe younger.  One was exceedingly friendly, the other more timid.  I noticed they had matching collars, so I broke out the treats and the friendlier of the two came right over.  I checked for a tag, but there wasn’t one… on either dog.

I was able to lure them back over to the lot, with the idea that I would somehow get them in my car so I could take them someplace to get scanned for a microchip.  These two were clearly bonded and obviously from the same home.  They also appeared to be really clean and in good shape.  These were not street dogs.  I suspected they were fresh out the door or gate of their home. 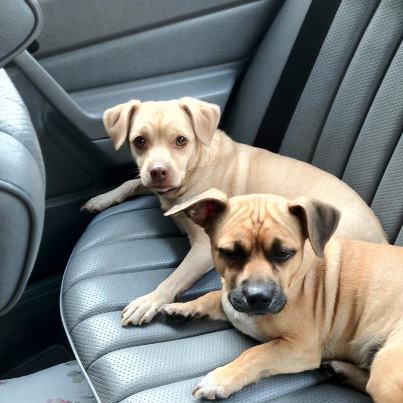 “Puto” in the back, “Holmes” in front. A couple of heartbreakers, for sure…

I took them to a nearby vet to get scanned and, of course, neither had a microchip.  I also noticed a full set of balls on both, so they obviously hadn’t been neutered… which would explain their propensity to roam away from home.

So now, what am I supposed to do with these guys?  I had been up for about 24 hours at this point and, for a variety of reasons, I’m not really set up to have animals here.  I wish I could say that I happily agreed to take them in but, to be honest, it was just not a good day to fuck with this.  Had all kinds of other stuff to deal with, and I really needed to get a few hours of sleep.  But again, what were my choices?

My old friend Parker (a well-known LA-area dog expert) happened to be near the hood, so she came by and helped me get these guys temporarily set up in the crib.  Then we flyered the area, hoping that their guardian (notice I refuse to use the word “owner?”) could find them.  And that’s where things sit at the moment.

Yes, I’m glad I found them, because I know this situation will have a happy ending when it so easily could not’ve ended well.  And yes,  I have already bonded famously with both of them.  But the truth is, I’m a bit irritated that the guardian of these dogs did not do a few simple things for their companion animals (notice I refuse to use the word “pet?”).

Which inspired me to offer this public service announcement…

To All Dog Guardians:

Have your motherfuckin’ dog wear a tag with your phone number on it.

Have your motherfuckin’ dog microchipped so they can be scanned and returned to you if they get lost.

Have your motherfuckin’ dog spayed or neutered so, among other reasons, they will be less likely to roam the hell away from home, and so they will not reproduce in a world with more companion animals than guardians.

Okay, so now that we got that out of the way, here’s the alert part of the message:

For those of you in the LA area, be on the lookout for anyone who might be looking for these two little guys.  These are actually GREAT dogs, so sweet, friendly, loving and cool.  Everyone around the studio here flips over them, so I’m guessing that their guardians are trippin’.  I will continue to be as diligent as possible to help these guys find their original guardians this week, and I’ll keep you guys apprised of our progress.

However, once we get through the weekend, if it appears that a reuniting is not meant to be, then I’ll be shifting over to foster or forever home mode with these two, and will get them ready to transition elsewhere.  So if anyone is looking for a couple small doggies (we absolutely MUST keep these two together – no exceptions), get ready for the opportunity next week, or please be on the lookout for a fantastic home or temporary foster situation for these two.  Can’t imagine a better pair of pups for a worthy home.

And no – I will NOT be keeping them under any circumstances, trust me.  I love them, and will take great care of them in the interim, but they deserve a proper home with an engaged dad and/or mom… not some detached, absentee father figure like me (which makes me the ideal guardian for my feral colony!).

Bobby Rock is a world renown drummer, the author of nine books, and a recognized health and fitness specialist with certifications in exercise, nutrition and meditation. He has recorded and toured with a variety of artists, released three CDs as a solo performer and is recognized as a top drumming educator. He is currently touring with rock icon, Lita Ford. Through speaking, writing and activism, Bobby remains committed to a number of animal and environmental causes. Bobby lives in Los Angeles.
View all posts by Bobby Rock →
This entry was posted in Veganism/Animal Issues and tagged bobby rock, lost dogs, spay and neuter, veganism. Bookmark the permalink.

7 Responses to A Public Service Announcement For All Dog People