Return to the Roots: the Agony and the Ecstasy

Wanted to throw a very relevant Zentauria excerpt up here today, but also riff a little on some recent happenings…

My grandmother made the transition last week, so I had to jump back to Florida this past weekend for the funeral.  She passed a couple days shy of her 89th birthday and lived a hell of a life.  Plus, she had been ill for a while and we all saw this coming way in advance.  Still, when is the death of a loved one ever easy?

And I’ll tell ya… I guess I still have some deeply-rooted connections to the general ambience of the funeral home – the somber vibe, that shitty “somebody died” music, the scent of all those flowers, the polished casket – because I still fucking fall apart in those places.  Don’t know if I’ll ever transcend certain memories.  My family is infinitely patient with me.

Speaking of which, one of the positives of the experience was reconnecting with so many from that side of the family.  What a cool bunch of characters, if I don’t mind saying so myself.  Seriously, there’s nothing like looking into the eyes of a blood relative and getting that deep sense of “home,” no matter how much time has passed since you last saw them.

To the casual observer, one might deduce that my life and lifestyle in liberal-ass California for the past 25+ years could create somewhat of a polarizing effect with some of my loved ones from the “Redneck Riviera” (as many refer to that part of the country).  Not so.  I love these folks!  And I always have a great experience with the people of Panama City, no matter how different our lifestyles, political leanings or fundamental beliefs might be.

After the service, a bunch of us in about a dozen cars were following the hearse and a highway patrol car to the cemetery.  As is tradition, we all had our headlights on and the cop had his lights flashing, as we slowly made that final ride.  But here’s what blew my ass away.  On the opposite side of the road, virtually every single car (headed in the other direction) had either stopped square in the middle of the street or pulled over to the side of the road, as a traditional gesture of respect to the deceased and their beloved.  Some had even gotten out of their cars and stood stoically as our procession eased on by.  It was fucking astounding.  All they knew was some stranger had checked out and we were all on the way to a burial.  But it was truly touching to see first-hand.

Of course, this extreme expression of respect might very well remain a tradition in other parts of the country.  But in LA?  Forget it.  I don’t ever recall this level of mindfulness paid to a procession.  Just reminded me of the fundamental goodness in people… all kinds of people. 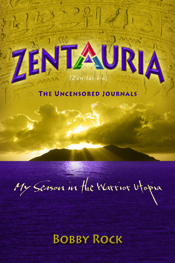 I thought I would share an excerpt from Zentauria that is completely relevant here.  The entry is entitled “Roots,” and it speaks to my family roots specifically.  In it, I refer to my Grandma Bernice as my only living grandparent which, unfortunately, I can no longer do.  But at least a small part of her legacy and influence can live on here in the written word…

Excerpt from; Zentauria by Bobby Rock

One of the interesting things I’ve noticed around here is that these people keep track of everything. Must be the hardcore left-brain, scientific side of their equation. I had been by the ZIH (Zentauria Institute of History), which documented absolutely everything about this place fiscally, creatively, politically, and otherwise. It was as overwhelming as it was impressive, and I found myself short-circuiting within three hours. But I ran into The Turk the other night, and I promised him I would go back and take a closer look at the genealogy section. Everyone called it the Roots Room, and Turk was the mad-scientist genealogist who knew everything about everyone’s family background. As I understood it, you could not only access the complete family tree of every Zentaurian from the beginning, but you could trace the lineage of many of the founding citizens several generations before they got here.

Everyone comes from somewhere, and I think it’s interesting how we are all these exponential aggregations of our parents and all of their individual histories, just as they were exponential aggregations of theirs, and so on. And if we carry any sense of culture or influence from any part of either side – especially if we were fortunate enough to have the duel influence of two parental figures – then this contributes all the more to our uniqueness.

As I walked to the institute down Central this afternoon, I thought about my own roots. Fortunately, my father has had a keen interest in genealogy for decades, so he’s been the sole purveyor of our family tree. On his side of the family, the branches have grown, curved, and extended in rather interesting ways, which has made the complete documentation a nearly impossible order. He’s traced the family lineage back to 13th century England on his mom’s side and back to 1795 on his dad’s, where things have been especially colorful ever since. It seems that my fourth-great-grandfather was an old school traveling tent-revivalist minister. He was also quite the ladies man, apparently, and not just to my fourth-great-grandmother. In addition to the 13 children he had with his first wife, there were a few potential diversions in the tree, if you know what I’m saying. [A traveling man who loves women… must be in the genes, right?] My dad’s had a tough time keeping track of the multiplying slew of kinfolk.

Virtually all of that side of the family has remained in the Southeast through the years, from the Carolinas down mainly into Florida. This gave my sister and me a rich experience of Southern living during our many family vacations to Panama City when we were growing up – the blue-collar culture, the grits and corn bread, the lazy twang of those accents, and the outdoor life of coon dogs, jeeps, and bass boats. [Yes, I’m a vegan who comes from a family of devout hunters and fishermen!]

My Grandpa Leavy was the quintessential man’s man character of characters: a hell-raising, coon-hunting welder who was never once late for work in more than 30 years at the paper mill. He was an astute outdoorsman who needed no compass to navigate through hours of dense forest. He loved backroom poker games in smoky bars and drinking whisky with friends. He was also, paradoxically, a world-class buck-dancer. Who would have thought that this rugged, salt-of-the-earth Southern man could move with the grace and dazzle of a seasoned Broadway performer?

Tragically, he was fatally shot back in ’74 by some drunken moron in a bar during a friendly game of poker. Such a sickening waste. While I have fond memories of his raspy laugh and warm demeanor, I have felt robbed by his passing through the years… deprived of the opportunity to have known him as an adult. What a noble, earnest man, taken from us in an irrevocable moment of idiocy. None of us ever truly got over that… especially my dad. If you ever want to know how far-reaching a single act of violence can extend, just look at the tree of any family who has endured a few.

Grandma Bernice – my only living grandparent – has always been a portrait of calm, Southern coolness. And I can really see how my dad is an amalgamation of both her and my grandfather… a “best of,” if you will. He truly is one of the most evolved, relaxed, and nonjudgmental beings I have ever known, and his influence on me has been immeasurable. I guess I lucked out in the father department.

On my mom’s side of the family, things were much simpler. At the turn of the 20th century, both sets of grandparents collected their families, got on a boat from Sicily, and wound up in New York. Once settled, they did what all Roman Catholic Italians do: they worked, ate, and procreated! This led to several generations of Italian kin in the Northeast, brimming with a multitude of siblings, uncles, aunts, and cousins.

In the late 50’s, some started migrating west to the Bay Area. This set the stage for my entrance into the world as a native Californian back in the 60’s and allowed my sister and me to grow up in somewhat of a multigenerational household. My grandma was with us every day, since both of my parents worked, and my grandpa would join us all for dinner every night after his shift at the foundry. On weekends, there were plenty of loud family get-togethers with our various aunts, uncles, and cousins, where everyone would talk at once over real-deal Italian cuisine.

My Grandpa Lodestro was an important part of my childhood, as he and my grandma followed our family to Houston in the 70’s. We spent an awful lot of time together, honing my baseball skills, watching the Astros on TV, and doing yard work in the broiling Texas sun. He was a brawny, bowlegged steelworker, as stubborn as he was generous, with big arms and thick, hairy ears. I swear to God, I once watched him smack a baseball the better length of a football field… using an axe-handle for a bat! We argued constantly, right up until his passing in ’87. But it was that harmless, generational kind of bickering that’s forgotten about moments after it happens.

My Grandma Lodestro was saintly… and I mean that in the literal sense of the word. She lived simply and joyfully and would sit quietly in her dayroom many afternoons, whispering through her rosary. Eternally optimistic, with not a judgment toward anyone or anything, she always had a childlike nature about her that endeared her to everyone she encountered. I always hoped she rubbed off on me the most.

Likewise, I see my mom as having certain traits from both of her parents… with an extra helping of that classic “Italian mom” thing. She’s always been the quintessential nurturing mother energy force, with an open heart to all, who would do anything for friends or family. [This included driving my little ass all the way across town during traffic hour for the first few years I was playing, so I could study with the best drum teacher in Houston.] Yeah, I guess I lucked out in the mother department, as well.

(Part II of this entry continues in the book.  If you would like a complimentary copy of Zentauria in PDF form, just e-mail me a request at bobby@bobbyrock.com and I’ll e-mail it to you directly. Be sure and put something in the subject line about “Zentauria,” or “Send it,” or something like that.)

Bobby Rock is a world renown drummer, the author of nine books, and a recognized health and fitness specialist with certifications in exercise, nutrition and meditation. He has recorded and toured with a variety of artists, released three CDs as a solo performer and is recognized as a top drumming educator. He is currently touring with rock icon, Lita Ford. Through speaking, writing and activism, Bobby remains committed to a number of animal and environmental causes. Bobby lives in Los Angeles.
View all posts by Bobby Rock →
This entry was posted in Uncategorized. Bookmark the permalink.

5 Responses to Return to the Roots: the Agony and the Ecstasy