The Gradual Mainstreaming of Veganism

Had to jump out of town for a last-minute trip today and found myself at the Baltimore airport on a lengthy layover.  I had some of my usual travel food and snacks with me, but thought I might try to grab a vegan burrito somewhere. This can be problematic at times, since some restaurants are STILL using lard for their beans (although we’re seeing less and less of this these days).  Found this place called “California Tortilla,” and as I was just about to pester one of the employees there about the lard issue, I noticed that right there on the lighted display menu – just to the right of one of their options called the “No-Meato Burrito  – it actually indicated that it was “vegan.” 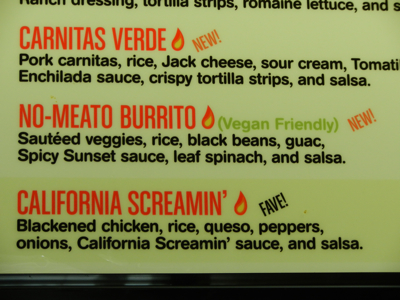 Just another indication that, yes, kids… vegan is becoming less and less of a dirty word in the mainstream everyday.

This might not seem like such a big deal, but after 20 years on the veggie path, and all the countless times I’ve went on a fucking expedition to find something I could eat (especially at airports), this was refreshing to discover.  Right there – for all to see – “vegan.”  Of course, I still had to double-check:

“So, these black beans have no lard in them, correct?

So it all reminded me of a couple mainstream CNN stories that I wanted to link to recently, during my hiatus from the blog.  One of them was a Sanjay Gupta story, and since I had so mercilessly busted balls on our brother in one of my blog posts, let’s consider this a “Sanjay redemption” piece.  It’s a 180 degrees from his news item that got under my skin, and it features Dr. Caldwell Esselstyn, who you all know I’m a big supporter of.  Some of you might have already scoped it from a few weeks back:

Pretty compelling science, even though it’s largely shit we’ve already known for the past couple decades.  Still… great to see it in the mainstream.  (And it didn’t hurt that Bill Clinton’s been following this routine lately…)

One other one from the CNN vaults that also features Dr. Esselstyn:

It’s a vid/article combo that covers some of the same themes, but might be worth a peek.

Again, I think it’s significant that we’re seeing this information and the word “vegan” floating around so much these days, and I just wanted to document a few more examples here for ya…

Bobby Rock is a world renown drummer, the author of nine books, and a recognized health and fitness specialist with certifications in exercise, nutrition and meditation. He has recorded and toured with a variety of artists, released three CDs as a solo performer and is recognized as a top drumming educator. He is currently touring with rock icon, Lita Ford. Through speaking, writing and activism, Bobby remains committed to a number of animal and environmental causes. Bobby lives in Los Angeles.
View all posts by Bobby Rock →
This entry was posted in Nutrition, Veganism/Animal Issues. Bookmark the permalink.

3 Responses to The Gradual Mainstreaming of Veganism