Okay, so week one of my official training is now in the books.  But before I document it for you guys, I figured it might be easier if I described the lead-up to my official first week in a separate post here, along with a few other prerequisite thoughts and objectives about this whole thing, training-wise.  (This will hopefully make for a more organized point of reference later.)

I started running again about 7 weeks ago, and really took my time about easing back into the groove.  I hate to admit it, but the first little mile run I did was very discouraging.  It was fucking hard, y’all!  I don’t care about how many weights you lift, or what other kind of training you do (which lately for me has included some basic martial arts stuff along with a little heavy bag work a few times a week).  Running is a whole ‘nother vibe!  Isn’t there some show called “The Biggest Loser”?  Well, I felt like just a “Loser” out there straining through that first full mile!  My legs felt like concrete, and I was thinking, “There’s no way my monkey ass is gonna make it no 26 miles!”  But – as I knew would probably be the case – I eased back into it pretty good after the first week or so and all was cool.  (That said, I continue to find the first mile or even mile-and-a-half to be the toughest.  It seems like I need a good 10-plus minutes to really work the kinks out.  It’s always been like that, though….)

I would generally run on Tuesdays, Thursdays and Saturdays, beginning with a mile, then a mile-and-a-half, then two… all at a really slow pace.  After three or four weeks, I settled into a nice groove that looked like this:

Monday: weights (see #3 below for info on my full-body regimen)

Saturday: longer run – starting with four miles, then moving to five miles for a couple weeks, then doing six miles right before the official training started.  (Would also warm-up and cool-down for this run, as well.)

Before most of these runs, I would start off at the gym, where I would generally do a little cardio work for my warm-up (usually on the bike or cross-trainer), followed by some stretching and maybe a little ab work, before doing my run that day.  After the run, I would walk back to the gym for my cool-down and finish up with some light stretching.

If I ran in the middle of the night, then I would walk a half-mile and do a little stretching for my warm-up, then cool-down by walking another half-mile at the end, followed by a little more stretching.

All in all, my prep-period was pretty easy because I did three major things that I never did before: 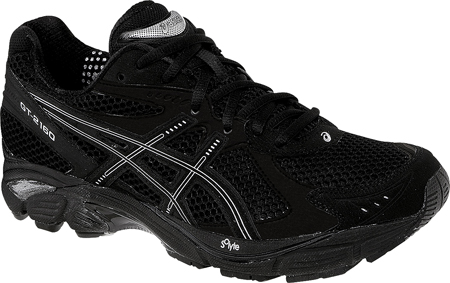 I always knew good shoes were probably important, but never bothered with them when I’ve run in the past.  This time – thinking that I was likely gonna do the marathon – I made the investment and it’s made a huge difference, let me tell you.  (Grabbed a pair of Asics GT-2160s.  Sweet!)

2. I consciously kept my pace really slow.  We’re talking 11 to 11 1/2-minute miles, I would guess.  On Tuesdays or Thursday, I might open it up to maybe an eight or nine-minute last mile, but I really wanted to err on the conservative side, even though it usually felt like I could go faster.

3. So as not to over-train, I’ve been sticking with a particular weight-training routine that I’ve been favoring these past couple years.  It’s based around a concept called HST (Hypertrophy Specific Training), and it’s centered around the philosophy of doing full-body workouts three times per week.  There is some pretty involved science in how it all works, with a lot of specifics that you have to follow to get the most out of this mode of training.  And of course, I’ve added a few notable variations to the standard HST protocol.  BUT, the idea is, you end up doing fewer sets per bodypart, per workout, but you hit each bodypart more often during the week.  The net result is that, while you’re still blasting the muscles hard enough to get excellent results (dare I say even “unprecedented results?”  Hey… the numbers don’t lie), it doesn’t feel as taxing on the body like so many traditional routines do, where you’re typically hammering the shit out of each bodypart with seven to ten sets.  For this reason, it seems more compatible with a strenuous form of endurance training, so I’m going to proceed with this HST variation thing and see what happens.

My training will be tailored around the following objectives:

1. To finish!: My main objective is to simply complete the 26.2 miles come marathon day.  That’s it for this first one.  If I should decide to run another, then I can worry about getting a faster time then.  But for now, I’m not going to trip about how slow I might be running.

2. To maintain my usual weight-training regimen and try to hold onto as much of my muscle weight and total strength as I can:  As mentioned in my original post, I’m expecting to drop some weight along the way, and as I do, I know I’ll be dropping a little muscle and strength, as well.  That’s the way it goes.  But I want to continue to train hard in the gym and keep jacking up those calories, as needed.  And this is also a reason to try and stay more in the “fat-burning” zone of a slower pace run, where there will be less chance of any of the potential “catabolic,” muscle-burning kind of shit that can supposedly happen when you’re hitting the heavy mileage each week.  Should be interesting to see how it all unfolds!  I would think the critical times will be when we get up to those 14-mile and beyond kind of runs, but we’ll see…

3. To train injury free: In addition to my marathon training and all my usual weight-training at the gym, I will, of course, be hitting the drums a fair bit over these next number of months.  Much of this will be in the practice room (in addition to all the various shows and sessions I may be doing), so it will be tricky to navigate all of this extreme physical activity and keep my body together.  Still, this is yet another reason why I’m trying to keep my running pace slow and easy.

While I’m officially a member of “Team Kitten Rescue” (as that’s the charity I’m running for), my running coach is Trey Barnes, and I’m training with his Fleet Feet Encino marathon group this season.  They’re a cool bunch of folks, and Trey is very knowledgeable, as he has experience in both running and coaching marathoners and ultra-marathoners.  There is opportunity to train with this group up to three times per week: a shorter run on Tuesday, Yoga on Thursday (as one of the cross-training days), and then the long run on Saturdays.  Not sure how many of these I’ll be able to make each week due to my schedule, but my priority will be to at least try to do the Saturday run with them every week that I’m in town.  This last week I did all three days with them and they were kick-ass workouts.  I’ve also merged my weight-training routine into the training schedule they handed over to me, so for now, this will be the regimen I’ll be doing my best to stick with, day after day.

However – I will be paying extra close attention to my body each week, and if I feel like I need to alter the weight-training aspect or experiment with different cross-training parts of the regimen, then I’ll revisit that as I need to.  But I really don’t want to vary the fundamental running/mileage aspects of the marathon training.  It seems very specific!  So I want to stay as close to my coach’s running directions as possible.

The Regimen (for now…)

Because of the way my weight-training regimen cycles, my training week will start each Sunday.

So this is the starting point.  Let’s see how it all unfolds.  Will also get to some dietary stuff here, as well, although out of the gate, my eating regimen is the same.

Damn… these marathon entries are getting pretty damn long!  But again, I’m just trying to document this entire process with as much detail as possible.  And I would imagine that once we get into the weekly summaries, the entries will be much more concise ( let’s hope!).

Bobby Rock is a world renown drummer, the author of nine books, and a recognized health and fitness specialist with certifications in exercise, nutrition and meditation. He has recorded and toured with a variety of artists, released three CDs as a solo performer and is recognized as a top drumming educator. He is currently touring with rock icon, Lita Ford. Through speaking, writing and activism, Bobby remains committed to a number of animal and environmental causes. Bobby lives in Los Angeles.
View all posts by Bobby Rock →
This entry was posted in Exercise, Marathon. Bookmark the permalink.